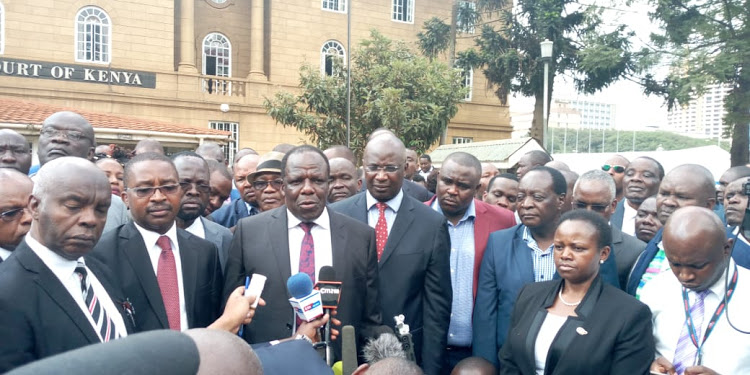 Governors have firmed up a "monumental case" against President Uhuru Kenyatta's Jubilee administration amid a protracted revenue sharing standoff.

With county governments staring at a complete shutdown without money two weeks into the new financial year, the county chiefs on Monday launched one of the boldest and aggressive campaigns targeting the national government.

They accused the Kenyatta regime of presiding over a rogue National Assembly determined to suffocate devolution.

The governors outlined five points of contention that they want the David Maraga-led apex court to arbitrate.

They want the Supreme Court to determine the input of the Senate in protecting counties at the Legislature, the legality of the IFMIS system and the formula for allocation of grants.

The devolved units' chiefs want the apex court to decide the legality of vote heads held by the national government yet relevant functions are devolved.

Further, they want the Supreme Court to pronounce itself on whether MPs can deviate from the recommendations by the Commission for Revenue Allocation on the shareable revenue.

The governors mobilised county assembly members to join Senate leaders in a symbolic protest march in Nairobi that culminated in the filing of the case at the Supreme Court.

The Supreme Court asked the petitioners to submit written submissions within three days and serve the respondents before the case is mentioned on Friday, July 19.

It is unusual for governors, who are heads of devolved units to hold protests, but yesterday the over 30 governors, deputy governors, Speakers of county assemblies and dozens of MCAs held a procession from the Intercontinental Hotel to the Supreme Court.

The county bosses were in an unfamiliar territory chanting “Haki Yetu (Our right) as they walked under tight security following the impasse on the Division of Revenue Bill 2019,
“In this second term, devolved governance is being attacked by denying county governments their resources. The National Treasury continues to hold counties hostage by always deviating from the Commission of Revenue Allocations recommendation by constantly denying disbursement of funds to counties,” CoG chairman Wycliffe Oparanya said.

The governors ignored an appeal by Deputy President William Ruto who had on Sunday asked them not to file the case as the Division of Revenue Bill, 2019 impasse would be resolved amicably.

The mediation between the senators and MPs collapsed, triggering the stalemate that now threatens to sink counties into a deeper financial crisis.

The forum was attended by most of the governors, Senate Majority leader Kipchumba Murkomen and his Minority counterpart James Orengo. Both fully backed the governors on the court case.

As we speak counties cannot operate. It is shameful for the national government and they should take full responsibility for this situation.

Kisii Governor James Ongwae
“If we leave the national Assembly to operate the way it is doing in the next two years, Kenya will be worse than the one-party Kanu regime. We are fully behind governors on this,” Murkomen said.

In their constitutional reference petition, the governours want the Supreme Court to declare itself on the role of the Senate in the legislative function of Parliament amid claims it is being muzzled by the National Assembly.

Crucial bills, especially those concerning county governments, are never forwarded to the Senate for consideration, debate and approval, the governors argue.

They argue that the situation has resulted in the under-funding of county governments while the allocation for the national government has since 2013 continued to increase.

The petition says that despite the constitutional role of the Senate in protecting devolution, the National Assembly does not regard the Senate as an arm of Parliament.

The county bosses have also advanced the issue of financial vote heads for devolved units amounting to billions of shillings being held by the national government.

They state that a large portion of the national government budget comprises allocations that are supposed to be channelled to county governments to follow devolved functions.

They named the national government ministries responsible for health, regional development, agriculture, water, environment, roads, and natural resources as among those getting huge allocations in the annual Division of Revenue Bill and budget yet most of the functions they undertake are devolved.

The governors have taken on the Jubilee administration over deduction of grants from the counties' shareable revenue.

Governors, for instance, say that Treasury officials continue to run conditional grants meant for the counties even when the money has been deducted from the counties' shareable revenue.

Some of the grants include funds for free maternal health care, leasing of medical equipment and grants for Level-5 hospitals.

They say the money appear merely on paper as conditional grants in the annual Division of Revenue Bill yet they are managed by accounting officers of the national government.

Governors say that the Constitution implies that counties are the ones to manage and account for the conditional funds in accordance with the conditions set if any.

“Therefore, there is a need for the Supreme Court to offer an advisory to ascertain whether the allocation of conditional grants in the annual Division of Revenue Bill is made in accordance with Article 202(2) of the Constitution,” the governors submitted.

They want the apex court to rule on issues about late exchequer releases to counties.

“The exchequer releases are not predictable. They are made at the discretion of the National Treasury. In addition, the releases are often made at the end of the financial year. This makes it impossible for county governments to implement projects and discharge their constitutional mandates,” the CoG's petition says.

The devolved units accuse the Treasury of holding them hostage by running a deeply problematic IFIMS system which it “shuts down and opens” at its discretion.

The CoG argues that there is a need for the Supreme Court to clarify whether IFMIS as currently constituted and administered violates the Constitution on the institutional autonomy of the county governments by impeding the performance of county governments and their expenditure.

Regarding the thorny issue of the Division of Revenue, governors want the Supreme Court to clarify if the National Assembly or the Treasury can disregard the Commission for Revenue Allocation recommendations on the shareable revenue.