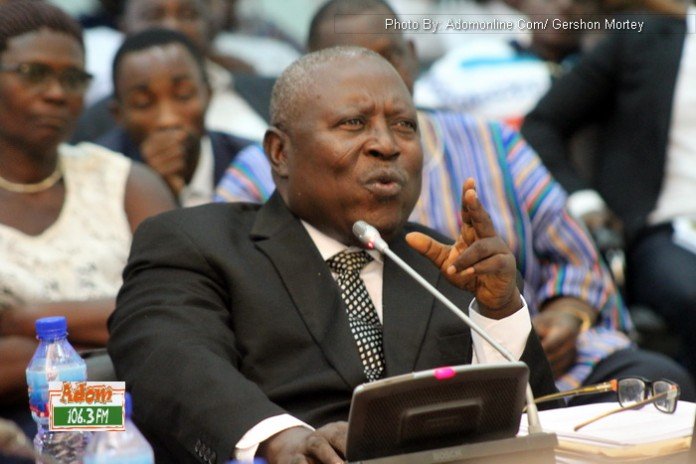 The Special Prosecutor, Martin Amidu, in his capacity as a private citizen, has dragged the Attorney General and construction firm, Waterville to the Supreme Court over the nonenforcement of an order directed at the Government of Ghana and the company in 2013 in the Amidu vs. Attorney-General, Waterville Holding (BVI) Ltd & Woyome in a judgement debt case.

In his application sighted by Citi News, the construction firm, Waterville Holding (BVI) Ltd was cited in the suit as second respondent/defendant/judgment debtor.

The Supreme Court on June 14, 2013, in a case brought before it by Mr. Amidu, against the Attorney General, Waterville Holding and Woyome in a €47,365,624 judgment debt case directed the Government of Ghana to retrieve the money from the respondents.

Martin Amidu, a former Attorney General, who dragged Waterville to court argued that the company had no contract with the government of Ghana but yet made claims for the payment of the money.

The apex court in the case upheld that Waterville Holding’s supposed contract with the Government of Ghana in relation to the work on a stadia in Ghana ahead of the CAN 2008 tournament was not valid.

The construction company was in 2013 ordered by the Supreme Court to return to the state monies it obtained illegally out of claims it brought against the state in 2009.

Waterville subsequently appealed against the judgment at the International Court of Arbitration , a case which dragged for a while but according to information available to Mr. Amidu, an arbitration award was made in April 2018 in favour of the Government of Ghana.

Amidu in his fresh application at the Supreme Court insisted that, one year down the line, the Government of Ghana is yet to retrieve the money from Waterville.

“I contend that, it is more than one full year since the Arbitration Tribunal brought the arbitration proceedings to an end in a manner favourable to the Republic of Ghana enjoining the 1st Defendant/Respondent, whose office was held responsible for creating the unconstitutional Judgment Debt, to enforce the orders and directions given by this Honourable Court pursuant to Articles 2 and 130 of the 1992 Constitution in my favour as the Plaintiff on 14th June 2013 and for the 2nd Defendant/Respondent/Judgment Debtor herein to obey and carry out the orders and directions made against the 2nd Defendant/Respondent/Judgment Debtor by this Court on even date”, Mr. Amidu’s affidavit stated.

Amidu also argued that, he is before the Supreme Court again because the Ghana Government’s nonenforcement of the apex court's order following the the development from the Arbitration Tribunal “for more than one full year since 30 April 2018, demonstrates that without any orders and directions from this Court to the 1st Defendant/Respondent to enforce the decision, orders and directions of this Court against the 2nd Defendant/Respondent/Judgment Debtor herein, the labour and expenses exerted by me [Martin Amidu] as the Plaintiff/Applicant who commenced this action to a successful decision by this Court for the people of Ghana would go in vain and be compromised by inaction on the part of the 1st Defendant/Respondent whose office created the unconstitutional Judgment Debt and the 2nd Defendant/Respondent/Judgment Debtor acting wittingly or unwittingly in tandem.”

Amidu is thus appealing to the Supreme Court to make an “an order directed to the 1st Defendant/Respondent, the Attorney General, to enforce the refund of all the total Judgement Debt of €47,365,624.00 (excluding interest thereon) and for the 2nd Defendant/Respondent/Judgment Debtor to obey and carry out the orders and direction of this Court contained in the judgment, orders, and directions of the Court made in favour of the Plaintiff/Applicant herein on behalf of the people of Ghana against the 2nd Defendant/Respondent/Judgment Debtor on 14th June 2013 pursuant to Articles 2 and 129 (4) of the 1992 Constitution after the conclusion of the International Chamber of Commerce Arbitration Case No.20562/TO and the issuance of the Order for Termination of the said arbitration in four of the Republic of Ghana on 30th April 2018 and for such further or other orders as this Honourable Court shall seem meet.” Date for hearing

The Supreme Court has scheduled the heraing of the case on October 16, 2019.

The application has been served on Ernesto Taricone, The Chairman of the Trasacco Group and said to be the Controlling Director and shareholder of Wattervile.

Former Attorney General Martin Amidu who dragged Waterville to court argued that the company had no contract with the government but yet made claims for the payment of the money.

Waterville had filed a stay of proceedings in the High Court in November 2013 but the court dismissed it.

The construction company was in 2013 ordered by the Supreme Court to return to the state monies it obtained illegally out of claims it brought against the state in 2009.

Waterville Holding Limited subsequently dragged Ghana to the International Court of Arbitration seeking to challenge an order of the Supreme Court ordering it to pay back the judgment debt illegally paid it.