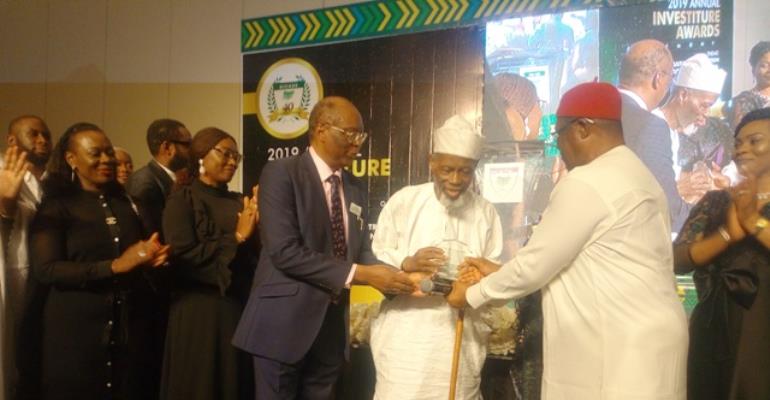 The Nigerian Institute of Chartered Arbitrators (NICARB) has conferred on the Proprietor of the prestigious Crescent University, Abeokuta,His Excellency Judge Bola Ajibola a Life-time Achievement Award in recognition of his achievement as the pioneer of arbitration and Alternative Dispute Resolution (ADR) in Nigeria.

Judge Ajibola was a distinguished awardee during the 40th Anniversary of NICARB and 2019 Investiture of new chartered members at different categories.

According to the Registrar, Mrs Shola Oshodi-John, NICARB was founded in 1979 under the leadership of Judge Ajibola and was duly incorporated in 1988 under the Companies Act as a legal entity.

Judge Ajibola received the award in company with his wife Alhaja Amatullah Ajibola and his children led by Barr. Adesegun Ajibola,a Senior Advocate of Nigeria as NICARB described the honour as an icing on the cake for the international jurist.

Former governors of Enugu and Edo States Dr Emmanuel Nwodo and Professor Oserhheimen Osunbor at the Orchid and Lantana Hall of Eko Hotels and Suites, where 447 Associate Members, 121 Full Members and 40 Fellows were inducted respectively.

Presenting Judge Ajibola for the award,Prof. Fabian Ajogwu noted that "in celebrating your commitment as a pioneer and leader in the Arbitration (and ADR) space,the Nigerian Institute of Chartered Arbitrators (NICARB) decided to confer on you the Lifetime Achievement Award".