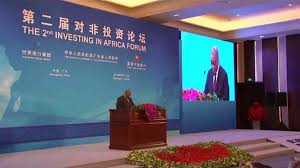 The two-day event aims to promote experience-sharing between China and Africa, as well as accelerating Chinese investments in the continent.

Around 300 government officials, entrepreneurs and other delegates will be taking part in the forum jointly hosted by the Chinese Development Bank and the Chinese government.

Chinese businessmen have been eying to tap into Africa’s growing markets, as most countries seek to speed up industrialization and agricultural modernization.

In 2000, China’s total investment in Africa was less than one billion U.S. dollars, but by the end of 2015, they exceeded 100 billion U.S. dollars. As the ties between China and African countries grow closer, more Chinese investors are expected to explore the African markets in the coming years.