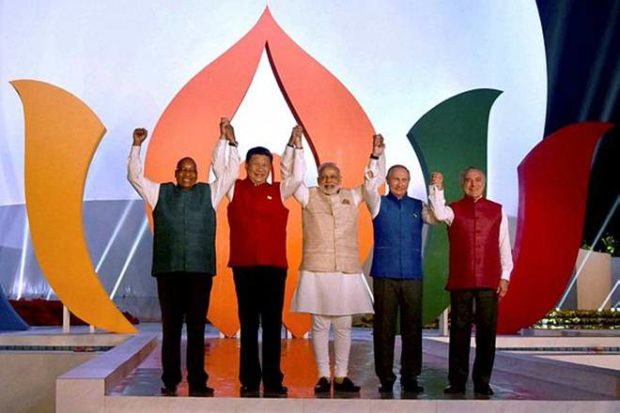 BRICS dispute resolution mechanism: Challenges ahead but promises much

In an attempt to increase economic cooperation, the discussions at the Brics summit in Ufa, Russia last year culminated in the constitution of the National Development Bank (NDB), a transnational bank, rivalling the IMF and other institutions historically dominated by western countries. The objective behind the NDB was first, to create a self-sufficient and independent financial institution for funding infrastructural development needs in developing economies. Second, to strengthen the economic ties within Brics. Third, to enhance this cooperation amongst Brics’ nations which would ensure greater say and influence on the international economic order, more commensurate with their dominant standing.

The need to bolster greater economic cooperation and development within Brics has also led to the idea for a Brics-centric dispute resolution forum. The 8th Brics summit at Goa, held on October 15-16, 2016, hosted by India as the chair of the bloc, presented an opportunity for addressing the new dispute resolution mechanism. However, with the summit focusing largely on improving regional cooperation for combating terrorism, this proposal remained on the back-burner. Even so, there is a need to address the future probability of such a mechanism and the challenges associated with the same, as it is likely to become an important issue in the time to come. The possibility of creating such a mechanism will come with its share of challenges.

Investment treaty awards are perhaps the best specimens highlighting these challenges. Of the five-member bloc, India, Russia and South Africa are facing heavy consequences of arbitral awards in several high-profile investment treaty arbitrations. For instance, since the award against India in the White Industries case in 2011, several bilateral investment treaties (BITs) have been used to initiate arbitration proceedings against the government. Most recently, India suffered another adverse treaty award in the Antrix-Devas case, wherein it was found to have violated its obligations under the India-Mauritius BIT. The country has been asked to pay $1 billion in damages. Being repeatedly faced with liability under BITs, the Indian government had to come up with a new Model BIT to safeguard foreign investors.

Thus, the viability of an independent dispute resolution mechanism with a focus on Brics’ countries, is being deliberated. In fact, in August this year, the Federation of Indian Chambers of Commerce and Industry (FICCI), in collaboration with the ministry of finance hosted an international conference as a precursor to the Brics summit. Eminent legal experts from all five member countries examined amongst other things, the viability of a Brics-centric arbitration centre,with a focus on arbitrating international commercial disputes between Brics countries, and offering its services to other developing countries when needed.

While seemingly a convenient solution, an independent dispute resolution framework warrants thorough contemplation. At the outset, it is imperative to have a consensus on the oversight mechanism for the constitution and day-to-day functioning of the proposed dispute resolution framework. Further, there appears to be some confusion between an intra-Brics arbitration centre (commonly called Brics-centric), and a general institution head-quartered in one of the Brics countries that offers international arbitration services to all developing nations.

Significant challenges may also arise regarding the jurisdiction of such an institution, whether this institution will be dedicated exclusively to intra-Brics disputes, or make its arbitration services available to any individual across the globe. The scope of the disputes that are arbitrable will need clarity. For instance, whether the mechanism will address disputes between the governments of two Brics nations, or between their respective citizens, or investment disputes between Brics nations, given the fact that this proposal stems from the problems faced in existing international framework for investment arbitrations.

Finally, any intra-Brics framework will only be effective if awards rendered by such a body are enforceable without the added difficulty of getting entangled in domestic proceedings. Problems of enforceability may cause diplomatic and policy challenges within the Brics nations, thereby posing hurdles to the formation of a treaty framework which will supercede the domestic arbitration laws of these countries.

The notion of a new dispute resolution mechanism for Brics requires a considerable amount of meaningful deliberation. The first step towards a transparent and effective dispute redressal mechanism for Brics is a multilateral understanding among these countries, followed by formulation of mutually agreed guidelines or a code, to establish a mutually beneficial framework dealing with trade and investment issues. If the long process and stages of deliberations involved in the setting up of the NDB is indicative of anything, it is safe to say that treaties and institutions set up commonly for Brics nations are nothing short of a herculean task.

A joint exercise must be carried out by the countries involved to understand how this arbitration mechanism will be coordinated and implemented between the nations, and its interaction with their domestic regimes. Dialogue with various stakeholders in these nations and building trust as to the reliability and efficiency of such a mechanism is crucial to its success. If implemented well, the idea of a Brics-centric arbitration mechanism appears to be promising for increased cooperation and sustainable economic growth in these countries.