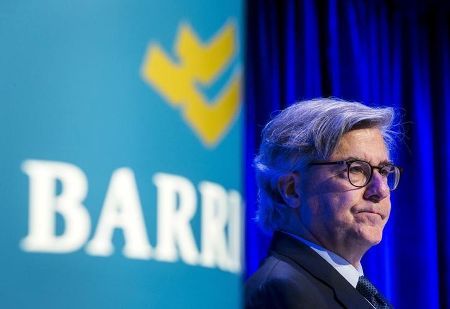 Earlier on Thursday, Barrick Chairman John Thornton told a news conference in Dar es Salaam that the company had agreed to pay Tanzania $300 million as a show of good faith. It clarified in a statement later that its unit Acacia would make the payment.

Thornton said the agreement would require approval by independent shareholders and Acacia’s board of directors. Acacia’s seven-member board has two directors from Barrick, one from Acacia and four independent directors.

Governments from Indonesia to South Africa are demanding greater control over mineral riches as metals prices rise. After moving into higher-risk countries to tap new deposits, mining companies are facing a rise in what is being called resource nationalism.

Barrick, the world’s biggest gold miner and 63.9 percent owner of Acacia, began talks with Tanzania in June. The government banned the export of unprocessed minerals and enacted laws earlier in 2017 to increase state ownership in mines.

Acacia was served in July with a bill for $190 billion for unpaid taxes, penalties and interest. It has been accused by Tanzania of evading taxes for years by under-declaring exports.

“Further details and additional clarity are required to fully assess the impact, but terms of the settlement appear to be less punitive than initially anticipated,” said BMO Capital Markets analyst Andrew Kaip in a note on Thursday.

The export ban was part of a push for the construction of a local smelter to make the country’s gold exports more valuable.

Tanzania’s President John Magufuli did not say whether the export ban would be lifted. Barrick and the government will form a working group to resolve Acacia’s tax bill.

“Now that we are all shareholders, we can sit down over a cup of coffee and amicably resolve any outstanding issues,” Magufuli said on television.

Tanzania is the continent’s fourth-largest gold producer and Acacia is its largest miner.

Reporting by: Fumbuka Ng'wanakilala, with additional reporting by Susan Taylor in Toronto; Writing by Maggie Fick; Editing by Mark Potter and David Holmes