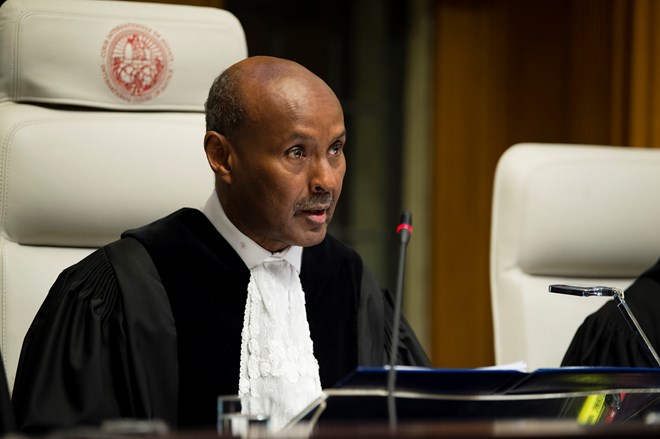 London (HOL) - The International Court of Justice has elected a new President on Tuesday. H.E. Judge Abdulqawi Ahmed Yusuf, the former Vice-President of the ICJ has just been promoted to the court's top job after a vote decided by a secret ballot.

The Somali Ambassador to the EU in Brussels, Ali Said Fiqi, confirmed the selection to HOL in a telephone call. Mr. Yusuf's bio page on the ICJ website has also been updated to reflect the promotion.

The prominent lawyer has been a member of the Court since February 2009, and previously served as the Vice-President of the court since 2015.

Yusuf was born in Eyl, a town in Northeastern Somalia in 1948. He graduated in 1973 from the Somali National University with a Dr.Juris in Law. He completed his post-graduate studies at the University of Florence in 1977 in International Law and Relations. He completed his Ph.D. at the University of Geneva in International Law. Since then, Mr. Yusuf has gone on to work for a host of international organizations, first as a legal advisor and eventually as a sitting judge. Yusuf has also authored more than 7 books and over 50 articles.

He will succeed Ronny Abraham of France as the 25th President of the ICJ and only the third African to hold the title after Nigeria's Taslim Elias (1982-1985) and Algeria's Mohamed Bedjaoui (1994-1997).

Ambassador Fiqi congratulated Mr. Yusuf on his appointment on behalf of the President of Somalia.

The ICJ is the main judicial organ of the United Nations. It is primarily reserved for settling legal disputes between member states.

Somalia and Kenya are due in court in 2018 to settle the maritime delimitation case.

The ICJ is made up of 15 judges elected by the General Assembly and the Security Council for nine-year terms.