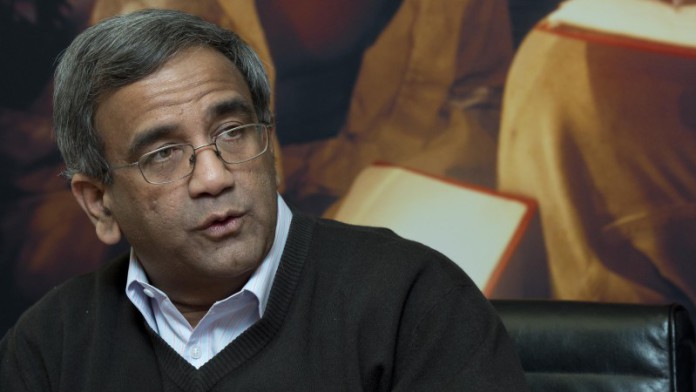 ANGLOGOLD Ashanti is to spend up to $500m reopening its Ghana mine Obuasi which will eventually ramp up to 450,000 ounces/year, effectively replacing the production the group sold during the intense restructuring of its South African assets.

It also paid a 70 SA cents year-end dividend (2016: 130 c/share) in an expression of its confidence in its cash flow, a surprise payout considering the 18% year-on-year increase to $953m in capital expenditure it spent in the 2017 financial year. Free cash flow in the period under review evaporated to just $1m from $278m in the previous year. The dividend was resumed at the close of the previous financial year.

Commenting in the group’s full-year results ended December 31, in which adjusted headline earnings came in at $9m or two US cents/share (2016: $143m; 35 cents/share), AngloGold CEO, Srinivasan Venkatakrishnan, said AngloGold would be able to self-fund its capital programmes, especially Obuasi.

“We don’t provide forecasts on free cash flow but suffice to say we are confident in our cash generation for 2018 especially as our capital [demands] are coming down. We have also lowered our South African debt and we remain highly leveraged to the gold price,” he said. AngloGold has based its plans on a real gold price of $1,240 per ounce.

“From a debt level perspective, we are targeting a 1.5x net debt to earnings before interest, tax, depreciation and amortization (EBITDA) ratio through the cycle, so debt will go up in times of high capex, but settle down,” he said. As of December 31, 2017, AngloGold’s net debt increased to $2bn from $1.9bn which was an increase in the net debt to EBITDA ratio to 1.35x from 1.24x at the end of the 2016 financial year.

AngloGold flagged the possibility it could re-open Obuasi in August pending negotiations with the Ghanaian government. At that point, AngloGold Ashanti group planning and technical executive, Graham Ehm, was pointing towards production of 400,000 oz/year as a target. Whilst the 450,000 oz/year suggests optimization, the interesting point is that capital on the reopening has been reduced to $500m from up to $1bn previously.

The investment proposition of the reopening will be a six year pay-back and free cash flow after four, said Ehm. The buy-in of the Ghanaian government has also been essential. Given the economic and technical work done on the project as well as the steadying of regulatory and political conditions undertaken, there was less appetite for a partner. The mine had been over-run by illegal miners previously.

“We would like to go it alone,” said Venkatakrishnan in response to a media question. “Any joint venture partner would be at the right time and on our terms.”

The mine would be re-opened in two phases, involve mechanisation and less labour, and involve capital spending over a two-and-half-year period. The first phase would include project establishment, mine rehabilitation and development, plant and infrastructure refurbishment with the first gold pour scheduled for the third quarter of 2019. The second phase, which would include underground workings such as materials handling and ventilation would take a further 12 months.

Having re-established the prospect of mining in Ghana, regarding which the group once sought international arbitration to resolve the illegal mining invasion, AngloGold was back at the courts, this time to tackle Tanzania.

There is uncertainty as to whether newly promulgated laws by Tanzanian president, John Magufuli last year apply to AngloGold’s Geita – the largest single mine in the AngloGold portfolio with production in 2017 of some 510,000 oz. AngloGold said today it had “… no choice but to take the precautionary step of safeguarding their [AngloGold’s Tanzanian subsidiaries] interests by commencing international arbitration proceedings …”.

AngloGold said it was also assessing the economic impact of mining code changes as proposed by the Democratic Republic of Congo (DRC) on its Kibali mine which it shares in joint venture with Randgold Resources. The proposed code changes have not been signed into law by the DRC’s president Joseph Kabila.