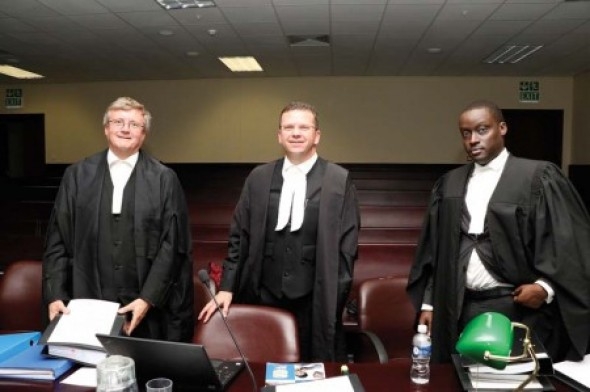 Lawyers representing the Botswana government and Russian metals giant, Norilsk Nickel, returned to the High Court this week, to continue their two-year battle over a US$271 million lawsuit. Although government has authorised a payout of P522m to settle the matter, it appears the Russians want an arbitrated solution in London. Staff Writer, MBONGENI MGUNI reports.

Even as outgoing Minerals Minister, Sadique Kebonang secured last minute approval of US$45 million to offer to Norilsk Nickel as a settlement of a US$271 million lawsuit, the Russian giant was pressing ahead with one of its lawsuits in the matter.

Kebonang, having overcome parliamentary resistance, clinched approval of the offer in his final week as minister before the recent reshuffle. The total amount to be offered to the Russian metals giant is P522 million, with the other funds already sourced and allocated from the Minerals ministry itself.

The Russians’ official response to news of the offer was cool.

“The negotiations with the Botswana government and BCL’s liquidator have entered their final stage, but the documents formalising the agreements have not yet been signed, and the respective calculations are still pending. The Group is confident that the negotiations will wind up soon, leaving no misunderstanding between Norilsk Nickel and Botswana,” a statement read.

As Kebonang’s successor, Eric Molale entered his new tenure, the state of play in the negotiations would have appeared far more encouraging, particularly when compared to the dark days of 2016 and 2017 when the Russians slapped government with multiple lawsuits across the world.

On Wednesday, however, a high-powered team led by South African advocates was once again at the High Court pressing ahead with a lawsuit under which Norilsk Nickel wants leave to proceed with arbitration in the US$271 million matter at the London Court of International Arbitration (LCIA).

The amount represents the price BCL agreed to pay back in 2014 for Norilsk’s African assets, which include Nkomati Nickel and Tati Nickel. The deal was subject to several conditions, including the approval of the South African Department of Mines whose consent, being the final step, would immediately require BCL to pay the amount.

The Department approved in September 2016, but BCL balked, then closed its doors in October 2016, sending the Russians speeding to the LCIA without the leave of court.

According to government representatives, another lawsuit, over reckless trading, is also due before the High Court, suggesting that rather than banking on the negotiations, the Russians are adopting a multi-pronged legal and political approach to securing a victory in Botswana.

Before Justice Godfrey Radijeng, neither side even as much as hinted there were settlement negotiations in progress. Instead, it actually emerged that even BCL’s suit in South Africa seeking essentially to undo the Norilsk deal on a technicality, is also steaming ahead.

The tone of arguments between the senior advocates in this week’s case did not seem to suggest a warming of relations between their clients. The suit that came before Radijeng dates back to a November 2016 decision by Norilsk to commence arbitration proceedings against BCL in London. The mothballed miner’s lawyers say the Russians are asking to be granted leave to a process they have already begun and are only doing so to protect themselves as they flouted local laws by kick-starting the London action without court leave in 2016.

Not so, according to Norilsk’s lawyers.

“The conditions under which the share sale agreement was fulfilled were achieved on September 30, 2016 and Norilsk Nickel claimed the amount of US$270 million,” Norilsk Nickel representative, senior advocate Alistair Franklin told Radijeng. “It was a surprise that BCL suddenly argued that the conditions of the share sale agreement had not been fulfilled. There was a dispute between the two parties on whether these conditions had been fulfilled or not and Norilsk invoked its right under the agreement to refer the matter to the LCIA.

“It’s very clear that it is therefore in the best interests of the liquidation process that leave be granted to Norilsk to go ahead with the arbitration.”

Another Norilsk attorney, senior counsel Adrian Botha said the winding up of BCL was being held back by the delay in LCIA arbitration.“It’s being held up because there’s a dispute about whether the conditions were fulfilled or not. This dispute must be resolved first, then the liquidator can choose whether to go on with the share sale agreement, meaning he pays Norilsk, or he quits it, meaning Norilsk seeks damages. That would then go into claims to be proven by the liquidator,” he said.

Advocate Steve Vivian, representing BCL’s liquidator, Nigel Dixon-Warren, pleaded with the court to not only dismiss Norilsk Nickel’s request, but also hit the Russians with punitive costs on an attorney-client basis, saying they had been warned against bringing the suit as it had no merits.

“On November 30, 2016, they submitted a request for arbitration at LCIA which common cause says the arbitration has begun, but now they are saying they want leave to proceed.

“They refused to withdraw the arbitration even though they were informed that it had been submitted unprocedurally.

“Their attitude forced the liquidator to go to London to defend this action.

“In addition, the applicants did not make an effort to prove their claim at the first creditors’ meeting,” he said.

Legal eagles following the matter say the back and forth in the court rooms will continue until the clients in the matter instruct their lawyers to withdraw the cases. That, however, will only happen once both sides have signed on the dotted line.

“Before October 2016, there was good faith amongst the parties and had there been a similar situation with a dispute, you could envisage them withdrawing lawsuits as they negotiated.

“However, the relations have deteriorated and the Russians, in fact, have issued press releases accusing government of sneaking in BCL’s liquidation to avoid paying the US$271 million. “The lawsuits will continue until an agreement is inked and monies actually change hands,” a lawyer following the case believes.

As for the Russians, negotiations will only be over once “documents formalising the agreements” have been signed, and the “respective calculations” finalised.

Radijeng has reserved judgement to June 21, 2018 and all eyes are on whether a deal is signed before then.