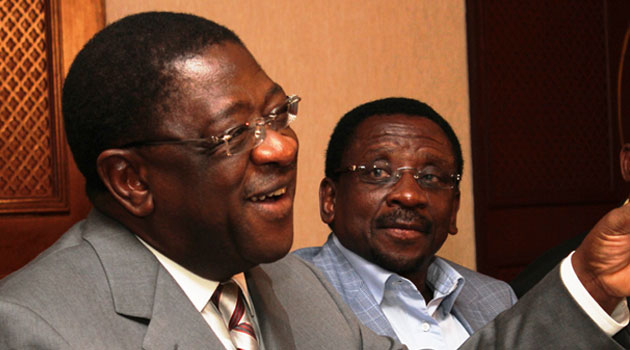 NAIROBI – Senator Amos Wako and Head of Public Service Joseph Kinyua have been summoned to appear in court to give evidence over the multi-billion shilling Anglo Leasing contracts awarded to companies associated with the Kamani family.

Wako was Attorney General while Kinyua was Finance Secretary at the Treasury when the contracts were signed.

Trial magistrate Felix Kombo said the two should appear on June 26 and 27, 2018, stating that it was important they honor the court summons.

The court ordered Mark Henzellk who represented the Government of Kenya during the commercial arbitration to also appear in court between July 18 and 20, 2018.

Kombo further directed the prosecution to file their application seeking to have video evidence within 14 days to allow the defence counsels file their responses within seven days.

He directed the matter be mentioned on May 9 to confirm compliance of the court’s orders.

Last month, Deputy Solicitor General Muthoni Kimani revealed that the charging of Anglo Leasing suspects was as result of investigation report that showed a crime had been committed.

She told the trial magistrate that 18 contracts that were signed by companies associated with Kamani family came to haunt the government.

Deputy Chief Executive Officer from the Ethics and Anti Corruption Commission (EACC) Michael Mubea also confirmed in his evidence that indeed investigation were carried out upon receipt of the report from the office of the AG.

Wako said this paved way for the signing of Anglo-Leasing contracts, the court heard.

The contract was awarded to Infotalent Limited to implement a proposal to computerize the Kenya police department systems.

Deepak Kamani, his brother Rashmi Kamani and their father Chamanlal Kamani are being prosecuted together with three former senior officers.

Last year they moved to court to stop the Kenyan government from releasing information to the Swiss authorities in relation to the controversial Anglo Leasing contracts.

They are linked to companies that were awarded 13 out of 18 Anglo Leasing security contracts.