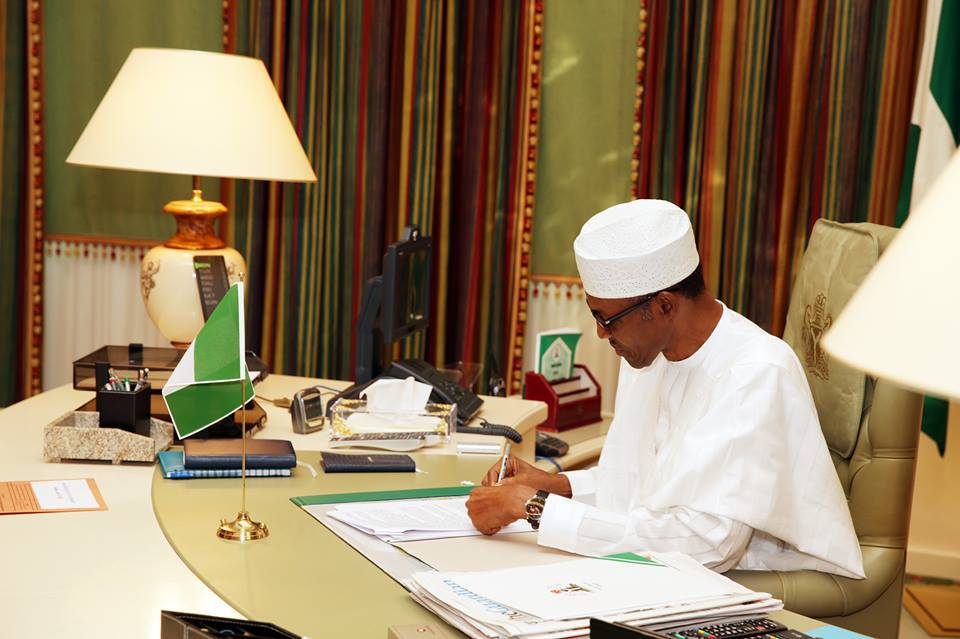 Even as the Nigerian economy is struggling to maintain stability after managing a recovery last year from one of the worst recessions in its history, Nigeria appears to be sitting on a tinderbox that could wipe off a sizeable chunk of its foreign reserves, derail the 2018 budget and plunge the economy back into recession.

Two arbitration awards totaling over $8.9bn (about N2.7 trillion at CBN’s N305.4 as of May 22) have been made against the country and it does appear efforts by the Muhammadu Buhari’s administration to dodge payments have failed, leaving it with no option than to honour the judgment obligations.

The fines emanated from the contractual actions of three previous administrations – the Olusegun Obasanjo, Umaru Yar’Adua and Goodluck Jonathan regimes.

On March 20, 2013, a three-man arbitration panel, constituted under the rules of the Arbitration Act 1996 (England and Wales) and the Nigerian Arbitration and Conciliation Act (CAP A18 LFN 2004), awarded $6.6 billion in favour of Process & Industrial Development Limited (P&ID), an engineering firm registered in the British Virgin Island (BVI).

That award has since attracted additional $2.3billion in accumulated interest at 7 per cent rate per annum over more than five years it remained unsettled. The amount due for enforcement today is about $8.9 billion.

The dispute between the engineering company and Nigeria went into arbitration after the firm accused the Ministry of Petroleum Resources of breaching a gas supply and processing agreement (GSPA) it signed in 2010 on behalf of the Nigerian government.

The second award of about $21.24 million (N6.5 billion) was in favour of ENRON Nigeria Power Holding (ENPH) Limited, which signed an agreement with the Lagos State government for the construction of power projects in the state.

The federal government guaranteed the agreement and has now been held liable after Lagos was accused of breaching it.

The award in favour of ENRON, which has been affirmed by both high and appeal courts in the United States, has been awaiting settlement for more than a year and 26 days, since April 26, 2017.

The Attorney-General of the Federation and Minister of Justice, Abubakar Malami, did not answer calls to his telephone when PREMIUM TIMES called to seek his comment for this report. He also did not respond to text and WhatsApp messages sent to him.

But the Minister of Petroleum Resources, Ibe Kachikwu, told PREMIUM TIMES the federal government was aware of the outstanding obligations and was doing something about them. He did not provide details.

“We (federal government) are aware,” Mr Kachikwu said in a terse message in response to an enquiry. “The Attorney-General is handling them.”

Public commentators who spoke on Tuesday on the potential impact of the two awards on the country’s economy were alarmed that apart from its potential threat to the country’s assets abroad, the enforcement of these awards could clean out a significant portion of the country’s foreign reserves.

The Governor of the Central Bank of Nigeria, Godwin Emefiele, said on Tuesday at the end of the Monetary Policy Committee (MPC) meeting in Abuja that the current external reserves balance stood at about $47.79 billion as at May 18, 2018.

A senior official of the bank who commented on the issue on condition of anonymity said any unforeseen development at the moment that might have a direct consequence on the country’s foreign reserves would spell doom for the economy.

“I cannot imagine what would happen,” the official said. “All I can say is that the country would not be able to survive it. Remember, it did not take yesterday to build the level of reserves we have today. So, pulling out a staggering $11.3 billion in one fell swoop would be too much to bear.”

An investment analyst, Xavier Austin, said such awards could pose damaging consequences to the country’s economy at this time, particularly as the economy is still standing on wobbly legs barely a year after exiting recession.

The National Bureau of Statistics (NBS) said in its latest Nigerian Gross Domestic Product (GDP) Report that the economy recorded a -0.16 percent marginal decline in the first quarter of 2018 after attaining about 2.11 percent growth in the fourth quarter of 2017.

Apart from the immediate impact on the country’s economy, Mr Austin said enforcement of the awards against Nigeria could whittle down the country’s rating and chances of securing lending abroad.

“You can imagine where Nigeria will find itself if the N3.4 trillion (the correct amount is N2.7 trillion) award is paid. It means the country’s debt profile will swell beyond imagination,” Mr Austin noted.

The Chief Executive Officer, Economic Associates, Ayo Teriba, opted not to comment, apparently trying not to weigh the enormity of the impact on the already battered economy.

“This sounds strange to me. I don’t have enough facts about it and cannot think about what could happen. That’s why I want to refrain from commenting on it,” Mr Teriba said on telephone on Tuesday.

For Lead Director, Centre for Social Justice (CENSOJ), Eze Onyekpere, “If this is true, this will be absolutely a calamity and disaster for the country, considering that we already have almost N2 trillion deficit in the current budget and debt portfolio that is growing every day.

“The entire 2018 federal budget is equivalent of about $29.9billion. If someone has an arbitral award of about $11.1billion to collect, what will remain for the entire country of almost 200 million people?

“It means they have taken more than one-third of the 2019 budget. The truth is that the Nigerian economy cannot afford to pay that to anybody and still survive. That’s why I say it is a calamity,” Mr Onyekpere said.

HOW WE GOT HERE

On January 11, 2010, P&ID signed a gas supply and processing agreement with the Ministry of Petroleum Resources on behalf of the Nigerian government.

Under the terms of agreement, P&ID was to build and operate an Accelerated Gas Development project to be located at Adiabo in Odukpani Local Government Area of Cross River State.

The federal government was to source for natural gas from oil mining leases (OMLs) 123 and 67 operated by Addax Petroleum and supply to P&ID to refine into fuel suitable for power generation in the country.

However, P&ID alleged that after signing the agreement, the federal government reneged on its obligation after it opened negotiation with the Cross River State government for allocation of land for the project.

The company said attempts to settle out-of-court with the federal government failed.

In August 2012, P & ID served the Nigerian government a Request for Arbitration.

The federal govenment argued before the tribunal that “the failure of P & ID to acquire the site and build Gas Processing Facilities was a fundamental breach and that no gas could be delivered until this has been done.”

But the tribunal ruled that the Nigerian government’s obligations under Article 6B were not conditional upon P &ID having constructed the gas processing facilities.

In July, 2015, the arbitral tribunal found that Nigeria had repudiated its obligations under the GSPA and that P & ID had been entitled to accept the repudiation and claim damages for breach.

On December 23, 2015, the government asked for the award to be set aside. That was after earlier committing that the arbitration decision shall be final and binding upon parties.

In the tribunal’s opinion, the damage suffered by P&ID was the loss of net income the company would have received if government kept its side of the contract.

Apart from being a new company incorporated in 2006, Mr Ojo noted the project could not have started yielding benefits earlier than 2015.

However, considering that the final award remained unsettled since 2013, it attracted additional $2.3 billion in uncollected interest as of March 2018.

“The final award is governed by such a treaty — the New York Convention. So, Nigeria’s status as a foreign sovereign does not deprive this court of jurisdiction to confirm the award,” P&ID said in its March 16, 2018 application seeking enforcement of the award.

Following its failure to stop the arbitration, PREMIUM TIMES learnt the federal government opened initial negotiations for the settlement of the award. But, the effort was unsuccessful.

Enron International had indicated interest to work with the Lagos State government to construct a power project.

In 1999, ENPH signed a Memorandum of Understanding with the Lagos State government for the construction of the first and second phases of the project to be operated along with Yinka Folawiyo Power (YFP).

Another agreement was signed with the National Electric Power Authority (NEPA) – Power Holding Company of Nigeria (PHCN) – as power purchaser and regulator; ENPH as owner of the power plants, and Nigerian government as guarantor.

Exactly nine days after signing the PPA, court papers showed that NEPA wrote to inform ENPH about the suspension of the project till further notice.

That came five days after the World Bank wrote to Nigeria criticizing the draft of the PPA.

In January 2000, President Olusegun Obasanjo wrote to the Lagos State government to inform it that his Attorney General had declared the PPA invalid under Nigerian law and proposed its renegotiation.

Following the collapse of Enron International in November 2001, the company sought bankruptcy protection under Chapter 11 of the U.S. law.

The law allows companies to reorganize and restructure their debts, costs, personal assets and other obligations to continue normal business operations.

On the same day, ENPH wrote to the Nigerian government to say the bankruptcy situation in Enron International would not affect its ability to perform its obligations under the contract.

No response came from Nigeria until November 2005 when it confirmed the project remained suspended.

On June 13, 2006, ENPH filed a request for arbitration before the International Chamber of Commerce in London, alleging breach of contractual obligations.

However, after several attempts to get the Goodluck Jonathan administration to renegotiate the contract failed, ENPH on July 19, 2013 petitioned the United States District Court for the District of Columbia to demand confirmation of the award. The request was granted on October 16, 2015.

But the Nigerian government filed an appeal and again lost. On December 27, 2016, the U.S. Court of Appeal affirmed the award and issued a mandate for enforcement.

The final award against Nigeria in favour of ENPH stood at $11.22 million in damages, plus interest of $7.5 million; $1.14million in legal fees as of November 19, 2012; cost and expenses incurred in connection with the arbitration;