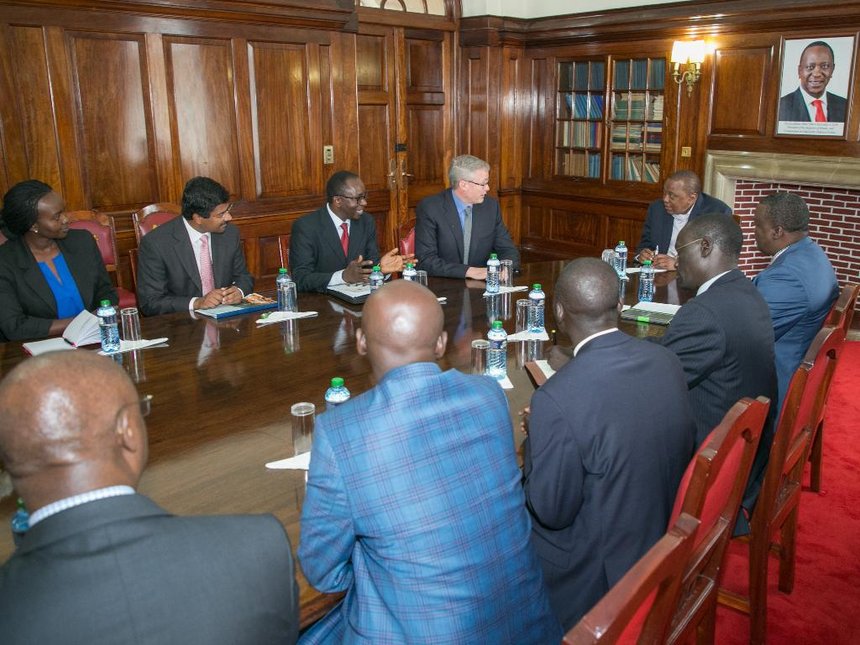 Why Kenya must fix oil and gas law before export

Global attention is turning to Africa as an investment destination following discoveries of significant mineral and oil deposits. Uganda, South Sudan, Tanzania, Ghana and Kenya are poised to join the ranks of oil-producers. Kenya has major coal deposits, oil has been found in Tanzania.

These developments have led to a discourse on the role of oil and the extractive sector in the socio-economic development of East Africa and its countries.

For Kenya to realise its Vision 2030 sustainable development blueprint, the government must ensure a reliable energy supply. Demand far outstrips supply and continues to rise. The government has scaled up efforts to harness geothermal potential and search for oil, natural gas and coal.

In 2010, it set up a committee to fast-track nuclear power development. Later it announced discovery of 400 million metric tonnes coal in the Mui Basin. Announcements were made in 2012 of oil and gas discoveries in Turkana county.

Commercial viability of oil and gas reserves is estimated at one billion barrels and exploration is ongoing. The government is keen to promote the oil and extractive industry to drive long-term sustainable growth, pursuing its Sustainable Development Goals.

These discoveries have been greeted with joy and high expectations poverty alleviation, higher living standards an broad-based national development.

At the same time, there is concern over how the benefits of these resources will be managed and shared. There is fear that if revenues are not properly planned for — and more importantly, equitably and transparently utilised through an accountable and transparent system ensuring fairness in benefit sharing — the resources could turn out to be a curse rather than a blessing.

The current debate is not misinformed. It is not lost on Kenyans that oil and gas discoveries have not propelled the major African oil and gas producers to greater heights, as compared to producers in Western Europe and Asia.

In many cases, sizeable petroleum reserves in less-developed countries have not improved economic performance.

Indeed, for many petroleum-rich, underdeveloped states, exploitation has reduced the competitiveness of previously productive economic sectors. This has lead to declining wealth, social and political unrest, increasingly disaffected populations, the emergence of rebel organisations, government corruption and destabilised domestic security.

While not a deterministic relationship, access to such valuable resources has pitfalls for less developed states lacking capacity to properly develop them.

The empirical connection between a state’s petroleum endowment and its tendency toward poor economic performance and domestic unrest is well established.

This relationship has led some to claim that access to oil reserves is a 'curse'. While there is nothing inherently destabilising about access to large oil reserves, petroleum lends itself to mismanagement, yielding unfortunate economic and security consequences.

The literature on oil and gas resources, especially among oil-producing and exporting African countries, reveals a worrying picture of poverty and underdevelopment, generalised violence and insecurity and general misery — amidst plenty of petrodollars.

Poor oil governance and mismanagement have lead to failure to exploit fortunes to meet citizens' needs and achieve sustainable development.

Examples abound of countries that struck oil and either immediately nose-dived into misery or at best continued to wallow in economic stagnation, unfavourable trade terms, dependency, unemployment and attendant social unrest — as in their inglorious pre-oil days.

Nigeria, for example, Africa’s largest oil producer and the ï¬fth overall worldwide, is a classical study in poverty amidst plenty. With proven reserves of 30 billion barrels per day, Nigeria earned $340 billion from 1965 to 2000. But by 2000, income per capita was exactly what it was in 1965!

More shocking: 70 per cent of Nigerians were below the poverty line, earning less than one dollar a day, compared to 36 per cent in 1970. At the same time, easy petrodollars erased the need for accountability, bred dictatorship, distorted the social structure, laid large swathes to waste and reduced the Niger Delta to an ungovernable hellhole.

Elsewhere, discovery and exploitation of oil in Gabon literally wiped out agriculture, industry and commerce, however, the oil has now run out, leaving the country in an extremely vulnerable position.

In Angola, unrealistic expectations of oil riches led to wanton expenditure on white elephant projects, resulting in unmanageable national debt. To date, the bulk of oil output is mortgaged as security for the loans recklessly incurred in anticipation of income from 'black gold'.

As for Equatorial Guinea, not only has oil bred an unaccountable government, but also the bulk of earnings have not translated into incomes for the citizens, who mostly live in penury. Petrodollars have been deposited into the personal bank account of top officials in Washington, DC.

It is evident, therefore, that if not managed in a democratic and transparent manner, coal, oil and gas resources could haunt Kenya for years to come.

Whether Kenya succeeds in turning revenues from non-renewable energy resources into long-term investments for her people ultimately depends on the quality of public policy, legal and institutional frameworks, transparency and public accountability.

Simply stated, given the right policy, legal and institutional frameworks and public accountability, energy resource revenues can be a 'black gold' blessing, rather than a curse.

Kenya’s mining, oil and gas policies, legal and institutional frameworks must be reviewed, as they were enacted or set up long before the discovery of oil and gas. While some pieces of legislation — such as the 2010 Constitution and the outdated Petroleum (Exploration and Production) Act — are in place, they do not address today's oil industry dynamics.

They, for instance, have no provisions obligating both the government and prospecting companies to make disclosures both at the contracting and the revenue-sharing level. Legislation requires urgent amendments to realign them to both constitutional requirements and international standards of transparency and accountability in extractive industries.

Energy resource development companies — like other large businesses with highly sophisticated legal advice — take advantage of weak frameworks to avoid tax liability. According to the Permanent Secretary in the Energy ministry, a 'farm-in' transaction was concluded between Africa Oil and the Turkana Drilling Consortium. Under this agreement, the consortium transferred 100 per cent working interest in Block 10BB to Africa Oil in exchange for a final maximum share transaction amounting to Sh726,574, 820,512.

In announced that pursuant to information from Africa Oil, on paper this was a cashless transaction. Appearing before Parliament's Energy committee, the PS said though there was a change in ownership of the company in charge of the operation, it was done within the law and the transaction itself was “cashless”.

Committee member Ekwe Ethuro, the Turkana Central MP, is quoted as having said: “The truth of the matter is that ownership has transferred from one company to another. It is misleading to put emphasis on what you call a ‘cashless’ transaction.”

Note that in 2010, one of the major players in Uganda’s petroleum Sector, Heritage Oil, sold its exploration licenses in the Albertine Rift to Tullow Oil. (Heritage and Tullow together owned a 50 per cent stake in two lucrative exploration blocks: 1 and 3A.) Tullow then became the sole company licensed to operate in those areas. (In addition to its stake in Blocks 1 and 3A, Tullow also has the sole exploration rights to Block 2.)

Tullow purchased Heritage’s stake for US$1.45 billion, after which Heritage ceased Uganda operations. In the aftermath of the 'farm-out' deal, the Uganda Revenue Authority demanded $434 million — 30 per cent of the sale — in capital gains taxes. This demand has led to a protracted legal battle. During pendency of arbitration proceedings filed in the United Kingdom, Uganda’s Tax Tribunal heard the dispute and found in favour of URA. Arbitration proceedings have now been completed and the court found in favour of Tullow's indemnity claim for $313 million in its entirety and also dismissed Heritage's counterclaim.

A typical 'farm-in' to a mineral property involves eventual transfer of an interest in the property. Thus, arrangements and details regarding transfer of any property should be reviewed to ascertain taxability of the transaction. Accordingly, the 'farm-in' arrangement and its taxability must be considered by the minister in conjunction with his consideration of approval of the transfer.

The cases of a local authority in Lamu demanding operation fees from GBP Oil Company Limited and protests by the Turkana community in Lokichar indicate that potentially serious tensions between interested parties lie ahead.

While the proposed Petroleum Exploration, Development and Production Bill is a progressive departure from The Petroleum (Exploration and Production) Act CAP 308 1986 revised edition, it has significant inadequacies. These include, inter alia:

Firstly, it combines petroleum exploration, development and production with petroleum revenue management and local content. Thus, it's not as detailed as necessary to ensure clarity, regulatory certainty and smooth enforcement.

Secondly, it makes no provision for an investment framework for managing petroleum revenues and clear rules for petroleum receipts and withdrawals from the Sovereign Wealth Fund the government plans to create.

Thirdly, it gives the Cabinet Secretary too much discretionary power which could easily be abused.

Fourthly, it lacks important provisions on gas development, eg, pricing and utilisation, which are necessary in a potential gas-boom country.

Fifth, the Bill lacks a comprehensive transparency regime. It should require disclosure of winning bids after public tender, beneficial ownership information and expenditure from oil revenues — these are contained reporting requirements of the Extractive Industries Transparency Initiative (EITI).

Further, the CS wields excessive discretionary powers, including licensing of petroleum contracts, appointments of heads and boards of regulatory agencies and performance of regulatory functions. There is no clear separation between the CS's policy-making and regulatory roles.

Lastly, Parliament’s role of ratifying petroleum agreements is well articulated in the Constitution. But since oil and gas is a new and very complex industry, Parliament cannot swiftly master the expertise to understand complex and technical matters in the sector, let alone effectively scrutinise agreements.

Further, Kenya’s mining, oil and gas policies, legal and institutional frameworks should be reviewed as they predate discoveries.

The upshot is that unless all issues are resolved before exports starts, we risk mismanaging a rare resource to the detriment of the nation. Caution must be exercised and the government must listen to counsel.

The author is a lecturer at Kabarak University and PhD candidate at St Augustine University, Tanzania, specialising in oil and gas law.