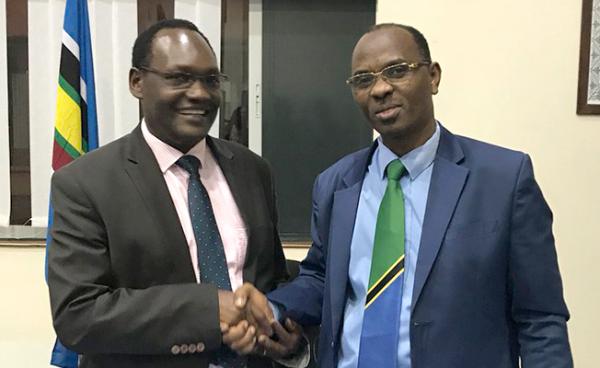 However, those trading in edible oils, confectionery, textile products and cement will wait a little longer as Tanzania requested to complete an ongoing verification exercise on the rule of origin for these products.

Representatives of the two governments told reporters yesterday that they have struck an agreement to quickly remove trade barriers that appeared to have escalated recently. The agreement was reached following a three-day consultative meeting held in Dar es Salaam. The Permanent Secretary in the Ministry of Industries, Trade and Investment. Prof Elisante Ole Gabriel and his Kenyan counterpart Dr Chris Kiptoo broke the news shortly after ending their closed door meeting under the banner of 'Kenya Day Trade and Investment Forum.' Members of the private sector from both countries were in attendance.

The two officials said they have signed a communiqué and matrix on how the sticky trade issues should be resolved as Dar and Nairobi looked to better cross boarder trade relations. Trade volume between the two countries, said Dr Kiptoo, has slowed to $285 million in 2017 from $420 million in 2012. Prof Ole Gabriel said Tanzania Revenue Authority (TRA) and Kenya Revenue Authority (KRA) have been directed to urgently meet and work on tax matters that were a bottleneck in the conduct of cross-border business between the two neihbouring countries whose trade volumes across the boarder have plummeted by more than half.

"After our discussions, we came to the agreement that the biggest challenge facing traders between our borders is smuggling... .We have agreed to involve our Home Affairs ministries to ensure that we totally eradicate the problem," he said. To curb smuggling, he said goods from either side, entering the other country, must have a Certificate of Origin. Prof Ole Gabriel said in line with the recently adopted Blueprint for the improvement of business environment in Tanzania, the government will do everything possible to ensure that it simplifies the procedures and requirements for doing business in the country. "We have also launched a business clinic that aims to diagnose business bottlenecks and intervene promptly when there are distress signs."

Trade between the two countries - whose combined gross domestic product account for 76 per cent of the economy of the East African Community (EAC) - has been characterized by mistrusts, resulting into banning of several products from accessing the rival's market.

Last year, Tanzania banned unprocessed foods, milk products and cigarettes from Kenya while the latter also banned LPG and wheat from the former. The bans were only lifted after the intervention of President John Magufuli and his Kenya counterpart, Uhuru Kenyatta. In a more recent row, Tanzania and Uganda introduced taxes on Kenyan made confectioneries like ice cream, chocolate, sweets and biscuits over Kenya's use of industrial sugar imported under a 10 per cent duty remission scheme. Tanzania and Kenya contend that the products do not meet the required local production certification as required under the rules of origin for trading within the EAC bloc.