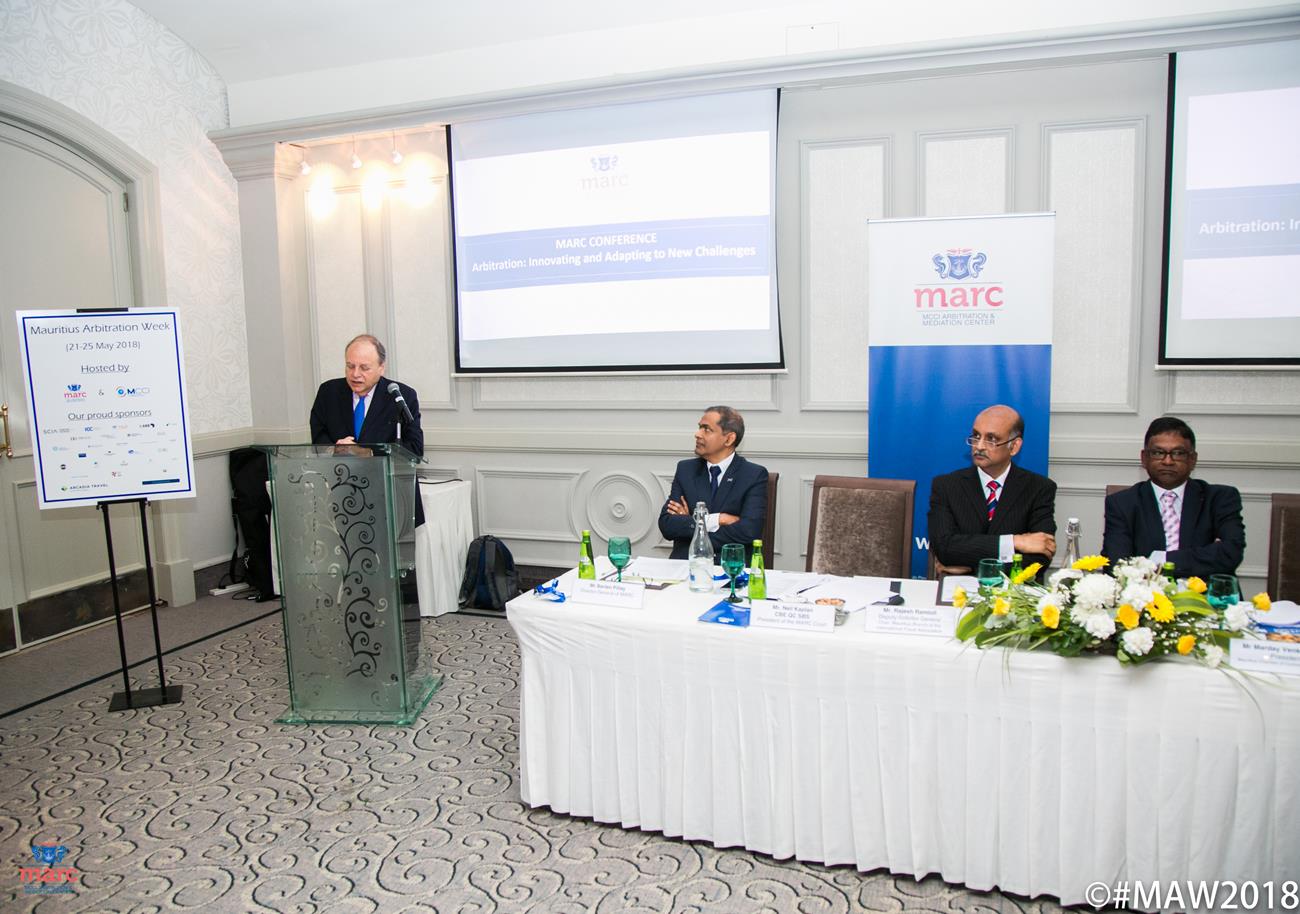 The MCCI Arbitration and Mediation Center (MARC) hosted the first edition of the Mauritius Arbitration Week, from 21 to 25 May 2018, a exciting week which was marked by a series of events, presentations and discussions on hot topics by leading practitioners. The week was launched on 21 May 2018 on the occasion of its main conference by Mr Neil Kaplan QC, President of the MARC Court.

During the conference, MARC unveiled its innovative new arbitration rules. The new rules “reflect best international practice” and include a “comprehensive tool kit of tried and tested provisions as well as innovative provisions,” according to Cheng-Yee Khong, member of the MARC Court, introducing them at the conference themed 'Arbitration: Innovating and Adapting to New Challenges', which was held in Port Louis. She chaired the Rules Drafting Committee together with Jamsheed Peeroo and Jalal El Ahdab, both members of the MARC Advisory Board.

The e-version of the New Rules is available here.

The aim of the new MARC Arbitration Rules is to facilitate the conduct of arbitrations as swiftly as possible with a view to minimising time and costs.

In the spirit of the Mauritius Convention that applies to investment treaty arbitration, they also provide for greater transparency in the commercial cases that MARC administers.

They include a suggested clause referring disputes to MARC arbitration, with options to select Mauritian law and the island’s capital as seat. If parties desire, they can also specify in the clause their preferred number of arbitrators and the language of proceedings. Other interesting features include an emergency arbitrator procedure – that provides for an arbitrator to be appointed to within 24 hours and decide any application for urgent interim or conservatory relief that cannot wait for the constitution of a tribunal within 14 days - an expedited procedures lasting six months for small claims of less than 25 million Mauritian rupees, and a procedure for the summary dismissal of claims or defences.

Further articles provide for jurisdictional objections that can be raised to be decided prima facie by the MARC Court if raised prior to the tribunal’s constitution and otherwise by the tribunal itself, and allow joinder and consolidation of claims.

The rules require more information at the commencement of the arbitration than previously, to ensure efficiency and allow parties a free choice of arbitrators, without restricting the to a list. A special mechanism is provided for the appointment of three-member arbitral tribunals in cases with multiple claimants or respondents.

Striking and innovative opt-in provisions provide for the blind appointment of arbitrators so they do not know which party picked them and for parties to agree to only produce documents that they intend to rely on in their pleadings, subject to the tribunal’s power to order production of additional documents in exception circumstances.

The rest of the week was marked by various interesting events such as training sessions (on arbitral secretaries and on award writing), an arbitration snapshot under the new MARC Rules 2018, breakfast sessions, ICC YAF and MARC45 events and much more, including social and networking activities. Themes spanned from arbitration in tax disputes, arbitration in natural resources and energy, arbitration in infrastructure disputes to fostering collaboration between ADR institutions, the contribution of ADR institutions to rule-making, and fair play in international arbitration.