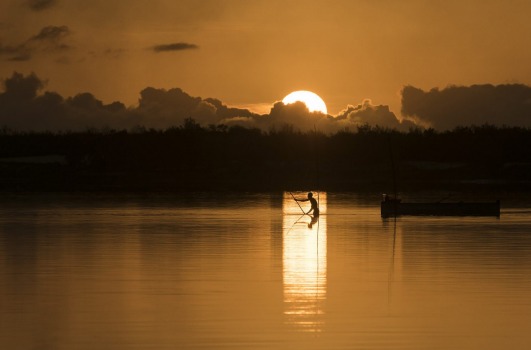 FAR Ltd chairman Nic Limb has left no doubt that the oil junior will press ahead with arbitration over the $US430 million ($574 million) sale of a stake in its Senegal oil project to Woodside Petroleum, even as Woodside dismissed the process as "frivolous".

Mr Limb said the arbitration set to kick off in Paris "holds no fears" for FAR and spelt out the possibility that Woodside could be cut out of the 640 million barrel venture altogether.

Neither should the process be of concern to shareholders given that a finding against FAR would only result in the status quo, with FAR retaining its 15 per cent stake in the SNE oil project, the budget for which has now been cut by a third to $US2 billion, he added.

Woodside's purchase of ConocoPhillips's 35 per cent stake in SNE in 2016 has long been disputed by ASX-listed FAR, which believes its pre-emptive rights were ignored.

While the respondent in the arbitration process is ConocoPhillips Senegal BV, that entity is now owned by Woodside Petroleum, dragging the Australian company directly into the dispute that was originally between FAR and US giant Conoco.

Woodside has repeatedly rejected any possibility of being squeezed out of the Senegal venture, with chief executive Peter Coleman last week describing the dispute as "noise out to the side".

He told investors it was "pretty far fetched" to suggest that a junior partner would put at risk the prospects of its only asset by derailing the project, which requires a development plan to be submitted to the Senegal government in the first half of 2019.

"It's a snooze or lose situation," Mr Coleman said.

A Woodside spokeswoman on Wednesday again shrugged off the dispute.

"Woodside maintains FAR's claims have no merit," she said. "Our intention is to vigorously defend this frivolous arbitration."

Proceedings for the three-month process are due to get underway as soon as the terms of reference have been settled, expected within days.

Mr Limb told shareholders that the $US2.20 a barrel price that Woodside paid for its stake was "low", and that FAR wants "the opportunity to consider purchasing those barrels at the same price".

The binary outcome of the arbitration is seen by some as likely to draw Conoco and Woodside to the table for a potential settlement with FAR.

FAR, which has a market cap of about $490 million, would need to join with a better funded partner should it get the opportunity to buy the stake, which is currently a key part of Woodside's international growth plans.

Meanwhile, FAR revealed the latest cost estimate for SNE of $US2 billion, down from an earlier estimate of $US3 billion. A presentation by managing director Cath Norman pointed to cost reductions for drilling and other investments that cut the estimate by 20-30 per cent.

She put the oil price at which the expected 100,000 barrels a day SNE project breaks even at $US35 a barrel.

Mr Limb said FAR is "fortunate that development costs are at multi-year lows" and that he is "encouraged" by the number of options available for financing the project. A final investment decision is earmarked for mid-2019, ahead of start-up in 2021-23.

Mr Limb cited FAR's exposure to the funding requirement and the arbitration as factors behind the "frustrating" stalling of FAR's share price in a 7.5¢-8.5¢ band for much of the past year, despite stronger oil prices.