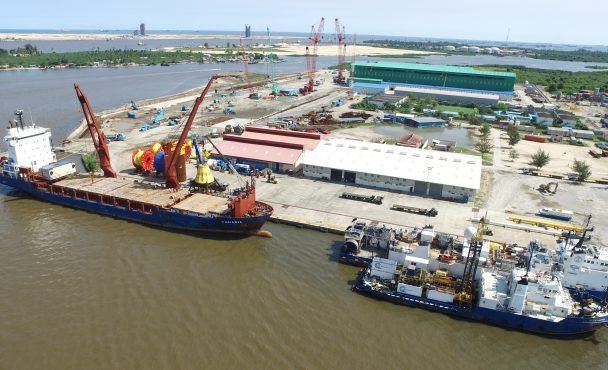 Untold story of the titanic battle between LADOL, SAMSUNG over local content

The Lagos Deep Offshore Logistics (LADOL) Base has accused its partner in the development of the Egina Floating, Production, Storage and Offloading (FPSO) project, Samsung Heavy Industries of Korea (SHI), of fraudulent practices and violation of Nigerian local content laws.

Speaking through its lawyer, Fidelis Oditah, LADOL and the LADOL Zone Management accused Samsung of taking LADOL’s equity in SHI MCI FZE, a joint venture, and giving itself 70 percent ownership of a fabrication and integration facility which was approved by the Nigerian government and funded by Total as the poster child of Nigeria’s local content policy in respect of the Egina FPSO project.

This, the company said, is a massive fraud against LADOL and Nigeria because it deprived Nigerians of a capacity development project which it had planned to attract other investments and create at least 50,000 direct and indirect jobs.

The company also accused Samsung of misrepresentation in relation to a US$214 million provision in the Egina FPSO contract allocated to the construction of the new fabrication and integration facility at LADOL, alleging that it was deceived to surrender its 80 percent ownership of SHI MCI FZE, a fabrication and integration facility owning vehicle.

Both companies are partners in the development of the $3.3 billion Total project, the Egina FPSO, which sailed to the oilfield in August. The FPSO is reputed to be the first of its kind in Africa and is to be put to use on OML 130, which is projected to add about 200,000 b/d to Nigeria’s total oil production when finally in operation.

While LADOL is an indigenous Nigerian company, Samsung is an international contractor.

The dispute between both companies began when LADOL and Samsung agreed between 2010 and 2013 to tender together (as local content partner and main contractor respectively) for the Egina FPSO contract which Total intended to award.

PREMIUM TIMES understands that this ownership structure reflected the fact that the upgrade of the fabrication and integration facilities at LADOL was one of the local content facilities approved by the Nigerian Content Development and Monitoring Board (“NCDMB”) and committed to by Total for the Egina FPSO contract.

As a result, the Egina FPSO contract provided that Total would pay Samsung a capital sum to enable Samsung to build the facility as a contractor to Total and in fulfilment of Total’s local content obligations and commitments to the Nigerian regulators, rather than as an investor.

Trouble however began when the joint bid by LADOL and Samsung was successful and it was awarded the Egina FPSO EPC contract ultimately in the sum of over US$3.1 billion. LADOL in its claim said, however, that unknown at that time to LADOL, the award included a sum of US$214 million for the construction of the upgrade of the fabrication and integration facilities at LADOL.

“As soon as the Egina FPSO contract was awarded, Samsung took every step and opportunity to exclude LADOL from the local content elements of the contract so as to appropriate to itself the upgrade and ownership of the fabrication and integration facility at LADOL,” the company claimed.

“In particular, Samsung unilaterally fixed the EPC costs of upgrading the fabrication and integration facility at LADOL at US$300 million, refused to have the upgrade project financed as was typical of such facilities, insisted on providing corporate finance on its own terms and asked LADOL to provide US$240m as debt and equity to pay for its 80% ownership of SHI MCI FZE and the facility.”

In December 2013, the company alleged, Samsung purported to terminate all its three agreements with LADOL for the upgrade of the facilities, namely the joint development agreement, the EPC Letter of Intent for the upgrade, and the shareholders agreement. It also issued three London Court of International Arbitration (LCIA) arbitral proceedings in London, England seeking declarations that each of the three agreements with LADOL had been validly terminated and asking that LADOL should pay it $18 million for the design of the fabrication and integration facility.

In January 2014, LADOL said it issued proceedings at the Lagos Division of the Federal High Court seeking 19 declaratory and other reliefs against Samsung, Total, NCDMB and the Minister of Petroleum Resources. However, in the 2014 FHC Proceedings, both Total and Samsung denied that the Egina FPSO contract made any provision for the upgrade of the fabrication and integration facilities at LADOL or allocated US$214 million or any other sum to the upgrade of the fabrication and integration facilities, whether as local content capacity building projects or at all.

“At the request of the Nigerian regulators the London arbitral and 2014 FHC Proceedings were compromised and settled pursuant to a settlement agreement between the parties to these proceedings dated 1 June 2014 (“Settlement Agreement”),’ LADOL claimed.

“The said settlement was on the basis of Samsung’s deliberate misrepresentation and fraud (upon which LADOL relied) that no money was provided in the Egina FPSO contract for the upgrade of the LADOL fabrication and integration facilities, whether as part of Total’s local content commitments or at all.

During the hearing, PREMIUM TIMES learnt, it emerged that contrary to the representations made by Total and Samsung before, during and after the settlement negotiations, the upgrade of the facilities at LADOL was indeed included in the Egina FPSO contract.

The company also said Total had paid Samsung at least US$214 million for the upgrade of the facilities and that Samsung was seeking to retain the US$214 million paid by Total and at the same time assert ownership of the upgraded facility which it was paid to build as a contractor to Total and its OML 130 partners rather than as an investor.

“It is therefore shocking that Samsung is still claiming ownership of the facility in LADOL, which it had built as a Contractor to Total (and other OML 130 owners) rather than as an Investor in Nigeria,” said Mr Oditah. “Samsung not only hid these facts from LADOL, it sought to exclude LADOL from the project so as to own the facility. Consequently, Samsung procured the 1 June 2014 settlement agreement by fraud and misrepresentations.”

The company explained further that while Total Chief Executive, Nicolas Terraz, reportedly admitted that “…a portion of the lump sum (released for the FPSO) was assigned for the development and upgrade of the yard facilities for in-country fabrication and integration” and is split into work packages solely for progress weighting and effective project management purposes, Samsung has remained consistent in its assertion of ownership of the fabrication and integration facility on the basis that it had singlehandedly funded the construction of the facility, which it claims to be US$300 million.

LADOL, therefore, alleged that Samsung committed at least three frauds and misrepresentations in connection with the June 2014 Settlement Agreement in order to induce LADOL to surrender its 80 percent equity ownership of SHI MCI FZE and the fabrication and integration facility. The fraudulent actions, it said, is the fraud by which Samsung took LADOL’s equity in SHI MCI FZE and gave itself 70 percent ownership of a fabrication and integration facility which was approved by the Nigerian government.

The second fraud was the alleged misrepresentation that there was no US$214 million provision in the Egina FPSO contract allocated to the construction of the new fabrication and integration facility at LADOL. which it said was false.

The third misrepresentation and fraud, according to LADOL, is the lie by Samsung that it made a foreign direct investment of US$300 million into Nigeria, whereas the truth is that Samsung was paid as a contractor to build the fabrication and integration facility.

“Samsung is a Contractor, not an Investor in respect of the facility. It invested nothing,” LADOL said.

Meanwhile, on September 5, the Global Resources Management Limited, GRML, a subsidiary of LADOL, terminated SHI MCI FZE’s sublease. The development deepened the disagreement between the parties, raising concerns around breach of contracts.

But LADOL in its explanation said the action was taken because of unremedied and material breaches of sublease covenant and denial of its landlord’s title. It accused its partner of asking the Nigerian Ports Authority (NPA), the head lessor, to carve out a portion of GRML’s leased land and grant a direct lease in favour of SHI MCI FZE, so that SHI MCI FZE could deal directly with all government regulators without needing to go through GRML or the Zone Management. Similarly, LADOL said it acted as a result of SHI MCI FZE’s anticipatory breach of the sublease agreement.

“Although its sublease provided for an upward only rent review, SHI MCI FZE wrote to GRML and numerous government agencies informing them that on the expiry of its current sublease in June 2019 it would unilaterally reduce its rent from US$70 per sq metre to US$5 per sq metre – a reduction of more than 90%!” LADOL claimed. It added that GRML regarded the renunciation of the upward only rent review as an anticipatory breach of the sublease contract which it accepted and immediately terminated the sublease as it is entitled to do as a matter of law, it added.

Similarly, on July 29, LADOL argued that SHI MCI FZE’s annual operating licence expired and terminated by effluxion of time. In order to renew its operating licence, it said, SHI MCI FZE was required to fulfil the requirements of Regulation 41 of the LADOL Free Zone Regulations 2016, which provides three cumulative conditions – payment of licence fee; provision of all information, documents and returns requested by Zone Management; payment of all outstanding amounts and fees due to Zone Management.

“SHI MCI FZE did not satisfy the conditions of Regulation 41,” LADOL claimed, adding that the company placed itself above Nigerian law and free zone regulations. “SHI MCI FZE was law unto itself, acted with impunity and had been in persistent and deliberate violation of extant laws and regulations.”

The Battle rages on

Meanwhile, the controversy between both parties remains unresolved as LADOL on 5 September issued proceedings at the Federal High Court, Lagos Division, seeking to set aside the 2014 settlement agreement it had entered into with Samsung for “fraud and misrepresentations and to restore the parties to their pre-2014 settlement ownership of SHI MCI FZE.” The arrangement would change the structure to 80 percent (LADOL) and 20 percent (Samsung).

LADOL, apart from seeking a rectification of the share register of SHI MCI FZE to reflect the 80:20 ownership structure, has also issued an interlocutory application for injunctions to restrain Samsung from parading itself as owner of 70 percent of SHI MCI FZE and from selling or otherwise dealing with or disposing of the shares in SHI MCI FZE pending the hearing and determination of the substantive proceedings.

Samsung declined to comment for this story. When our reporter called the official telephone line listed on the company’s website, man who sounded Chinese/Korean answered.

But after our reporter introduced himself and explained that he was working on a story about Samsung’s disagreement with LADOL, the man kept asking our reporter if he works for LADOL.

The line later got disconnected and subsequent calls rang out unanswered.