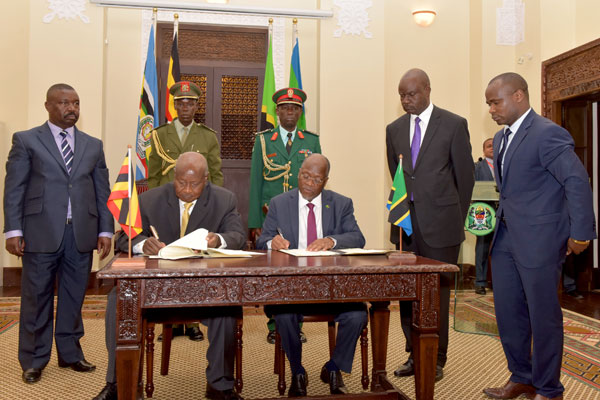 Kampala. An inter-government ministerial committee from Uganda and Tanzania will meet today in Kampala to discuss the proposed East African Crude Oil Pipeline.

Key on agenda, according to sources familiar with the matter, is the harmonisation of the Host Government Agreements (HGAs) of Uganda and Tanzania.

The HGA, whose signing is way behind schedule, details among others, rights and obligations of each of the parties - Uganda, Tanzania, and the joint venture partners - Cnooc, Total E&P, and Tullow Oil, transfer of money and acceptance to international arbitration, on the on $3.5b (Shs13 trillion) oil pipeline.

Today’s meeting was preceded by meetings of the technical team (permanent secretaries) from the Energy ministries of the two countries.

Once a harmonised position has been reached, the HGA will be signed later this year and subsequently ratified by the respective parliaments.

The HGA is a precursor to other key agreements such as shareholders and transportation, among others, to be negotiated with joint venture partners, before reaching Final Investment Decision.

The 1,445-kilometre pipeline will run from Hoima district in mid-western Uganda through 10 districts to Tanzania’s southern Tanga Port on the Indian Ocean coast.

Only 20 per cent - 298km - of the pipeline total length is in Uganda. The section, according to a project brief seen by Daily Monitor, is expected to cost $700m (Shs2.4 trillion).

Uganda and Tanzania are expected to shore up between 30 to 45 per cent of capital expenditure through their respective national oil companies - Tanzania Petroleum Development Corporation and Uganda National Oil Company.

Construction is expected to commence next year, and is projected to take 36 months during which between 5,000 and 10,000 direct and indirect jobs will be created.