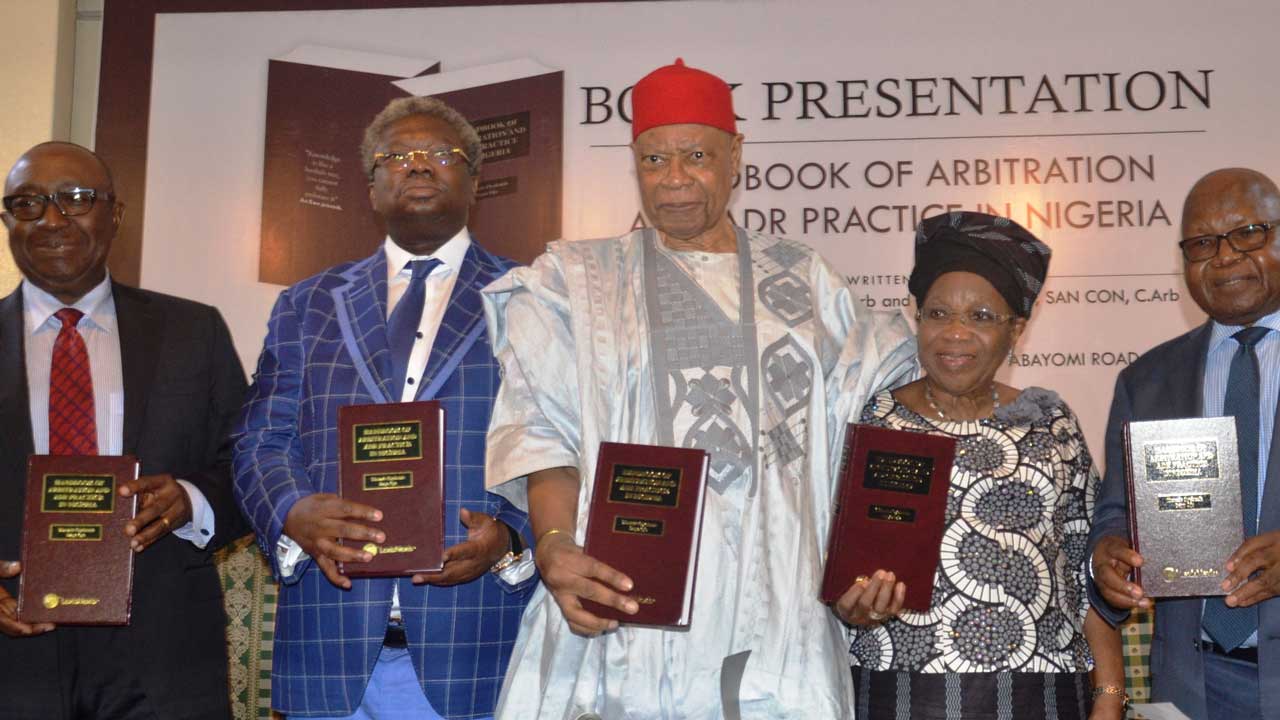 The book titled: “Handbook of Arbitration and ADR Practice in Nigeria” was authored by the founding member of the Board of Governors of the Cairo International Centre for Arbitration and the Kigali International Arbitration Centre (KIAC), Chief (Mrs.) Tinuade Oyekunle, and a former Attorney-General of the Federation (AGF) and Minister of Justice, Chief Bayo Ojo (SAN).

Oyekunle and Ojo, both described as Nigeria’s first and second chartered arbitrators, launched the book last Thursday at the Nigerian Institute of International Affairs in Lagos.

The event was honoured by arbitrators, Alternative Dispute Resolution (ADR) practitioners, jurists, senior lawyers, among others.

Mbanefo, the chairman of the event, said: “The importance of this book becomes clear when one considers the current growth in the practice of commercial arbitration and ADR in Nigeria.”

Mbanefo commended the authors for their contributions to the knowledge of ADR.Director of Research Nigerian Institute of Advanced Legal Studies (NIALS), Prof. Paul Idornigie (SAN), who reviewed the book, praised the authors for bringing their nearly joint 80 years of arbitration experience to bear on the subject matter.

“The authors are very competent to write a book of this nature,” Idornigie said.He noted that the title of the book had been a subject of debate among academics, and that with its 24 chapters and 521 pages, the book drew attention to some lacunae in the Arbitration and Conciliation Act (ACA), such as the non-definition of arbitration. Idornigie, however, observed that while conciliation and mediation were consensual, arbitration was both consensual and adjudicatory.

The professor noted the authors’ views that the rapid expansion of ADR around the world, might one day replace litigation in civil matters.

According to him, government support is imperative.The book presenter at the event was the chairman, Gibraltar Holdings Ltd, Sir Olu Okeowo. Co-author, Oyekunle recommended the book to everyone. She said: “The taste of the pudding is in the eating and, when our colleagues handle the book, read it, I’m sure it will be of great benefit, to everyone, including judges, in-house lawyers, students, etc. The book is very comprehensive.”

Explaining the idea behind the book, Ojo said: “The whole idea is to let people – students, judges – be knowledgeable about the process. For those who are practitioners, it is a ready companion, a ready tool which they can use as a reference from day to day.

“You find that in Nigeria, people hardly write books, we don’t have this book culture, so there is a dearth of books in most areas, so, this is to put something down for the coming generation to learn from, to get inspired and to achieve greater heights.”