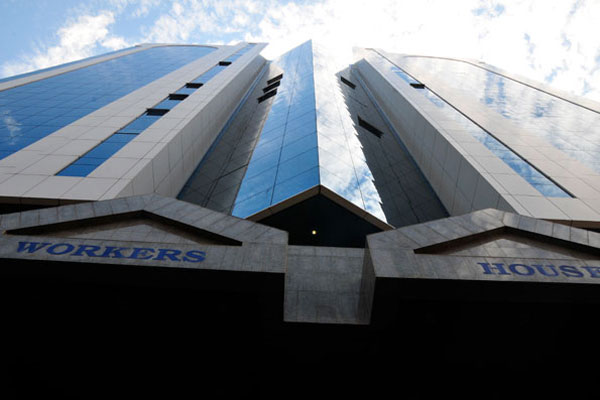 KAMPALA. Questions surrounding the claim by Alcon International Limited regarding the safety and ownership of Workers House have been resolved after court dismissed its case against National Social Security Fund (NSSF). Alcon International Limited had sought for compensation for alleged breach and termination of the construction contract for Workers House in Kampala.

In February 2013, the Supreme Court overturned a decision by the High Court and the Court of Appeal awarding Shs40 billion to Alcon Uganda for terminating its contract to build Workers House.

The country’s highest appellate court found that Alcon International Limited was not a Kenyan Company but a Ugandan one yet it was the Kenyan company which signed the contract to build workers’ house.

Then Chief Justice Benjamin Odoki sent the case back to High Court for retrial.

Alcon had sued NSSF accusing its managers of arbitrarily terminating its contract to build the 20-storey building located on Pilkington Road in the city centre.

In 1996, NSSF and Alcon International signed a contract but after a few years, the Fund terminated the contract, and allegedly confiscated Alcon’s construction tools, forcing the company to sue for damages.

“In my view, to allow a suit arising out of a fraudulent transaction would be frowned upon by the public policy. One cannot even argue that the fraud was just to enable the respondent obtain the building site and what happened later was lawful,” the judge reasoned.

NSSF managing director, Mr Richard Byarugaba said in the statement that the ruling signifies an end to this protracted litigation and justifies the Fund’s decision to challenge the adverse arbitration award.