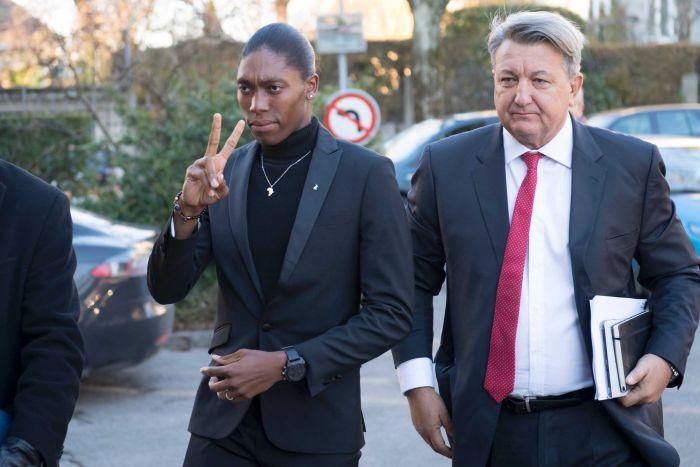 The lengthy stand-off between Olympic champion Caster Semenya and track and field's governing body over issues of gender, hormones and athletic performance has reached a pivotal phase as a key tribunal begins a planned five-day hearing in a case that could have huge ramifications for sport.

Both sides acknowledged the ruling in the case, which is not expected until late March, could have huge implications, notably over where to draw the line between the genders and how to ensure fairness in top-tier competition.

Semenya's lawyers issued a statement during the 10-hour session criticising the IAAF's release of a list of names of five experts that they planned to put forward to make their case.

Her legal team said that manoeuvre violated the spirit of confidentiality over the proceedings "in an effort to influence public opinion".

Her team of four lawyers said it had received the three-judge panel's OK to release the names of its own experts on Tuesday.

A woman wearing a jacket enters Court of Arbitration for Sport building in Lausanne, Switzerland. PHOTO: Semenya is challenging proposed rules on athletes with hyperandrogenism. (AP:/Keystone: Laurent Gillieron) Insisting on the need for fairness, the IAAF defended "eligibility standards that ensure that athletes who identify as female but have testes, and testosterone levels in the male range, at least drop their testosterone levels into the female range in order to compete at the elite level in the female classification".

The IAAF has proposed eligibility rules for athletes with hyperandrogenism, a medical condition in which women may have excessive levels of male hormones such as testosterone. Semenya wants to overturn those rules.

The scheduled five-day appeal case is among the longest ever heard by the sports court.

Neither of the delegations spoke on the way out of Monday's proceedings.

"The core value for the IAAF is the empowerment of girls and women through athletics," IAAF president Sebastian Coe said as the day began.

"The regulations that we are introducing are there to protect the sanctity of fair and open competition."

A colleague then pulled Coe away from reporters and said he wouldn't say more.

The IAAF wants to require women with naturally elevated testosterone to lower their levels by medication before being allowed to compete in world-class races from 400 metres to one mile.

Under the proposed eligibility rules Semenya, a double Olympic and triple world champion over 800m who won the 800m and 1,500m titles at last year's Commonwealth Games on the Gold Coast, would have to take daily medication or shift distances to run for South Africa over 5,000m.

Days before the hearing, the South African minister for sport and recreation, Tokozile Xasa, released a statement critical of the proposed regulations.

"What's at stake here is far more than the right to participate in a sport," Xasa said.

"Women's bodies, their wellbeing, their ability to earn a livelihood, their very identity, their privacy and sense of safety and belonging in this world, are being questioned.

"This is a gross violation of internationally accepted standards of human rights law."